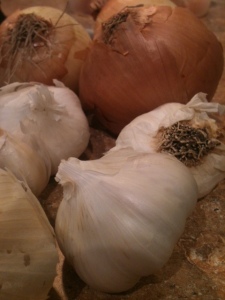 Costco has changed my life. To be honest, that is an overstatement. However, since I did buy some garlic IN BULK (meaning more than I could use in three years) and freshness was coming into question, I had to create a dish using much of it. And, since Costco “made me buy” a VitaMixer with a soup setting, the logical conclusion was to make roasted garlic soup. Done deal.

Side note: China produces 77% of the world’s garlic followed by India with 4%, South Korea follows with 2%.

Did you know? In the account of Korea’s establishment as a nation, a tiger and a bear prayed to Hwanung that they may become human. Upon hearing their prayers, Hwanung gave them 20 cloves of garlic and a bundle of mugwort, ordering them to eat only this sacred food and remain out of the sunlight for 100 days. The tiger gave up after about twenty days and left the cave. However, the bear remained and was transformed into a woman.

Back to the recipe. 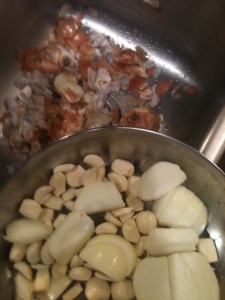 First step, one that lingers for days, is to peel the garlic cloves of four bulbs. Add two onions, peeled and cut in wedges into a frying pan. (Isn’t there a method of keeping garlic smell from permeating your hands or a way of getting rid of it? Please share if you hold the secret.)

Pan roast the garlic and onion in olive oil and butter with some sea salt and fresh ground pepper and seasonings (thyme could be used but I added some dipping spice mix -Parmesan Blend of roasted garlic and cheese- from Dean Jacob’s purchased at Le Gourmet Chef) until onion is clear and garlic is toasty brown. Stir continually to avoid burning.

Place roasted veggies in Vita-Mixer and add 3 cups of chicken bouillon (I used water and powdered bouillon) and three tablespoons of tomato paste (because I had some left over from another recipe that needed to be used!).

The Vita-mixer heats the soup by friction and it was ready to eat when it stopped.

From a small Mississippi town and have lived my adult life in the south. I am the wife of Tom Irby since 1974, mother of 8, grandmother of 8, lover of Truth, previous owner of The Baron York Tea Room Cafe and Gift Shop (7 years), cookbook writer, moderator of the Small Business forum on Social Media Examiner, enjoy life and all the adventure God brings my way.
View all posts by deairby →
This entry was posted in Recipes and tagged cream, garlic, onion, parmesan cheese, recipe, roasted, soup, tomato paste, vita-mix. Bookmark the permalink.